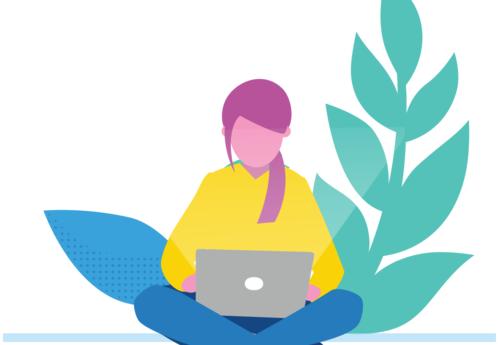 In the midst of the third week of Notre Dame’s Flexible Learning Environment, teachers and students are creating a learning community that exists virtually but is grounded in Notre Dame’s mission and delivers on the graduation outcomes. Today’s life-long learner is one who needs to develop what Tony Wagner, senior research fellow at the Learning Policy Institute and Harvard Graduate School of Education professor, calls the “Seven Survival Skills for Careers, College, and Citizenship.” These skills are at the core of 21st century education and schools preparing students for their future worlds. They are considered a set of core competencies essential to life-long learning. 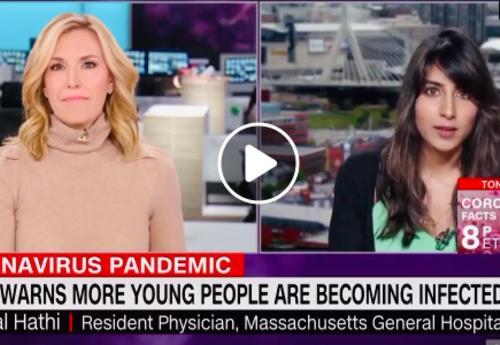 Notre Dame In the News

Notre Dame students and alumnae are doing amazing things locally, globally and virtually! Read about a few that were featured in the news over the last week. 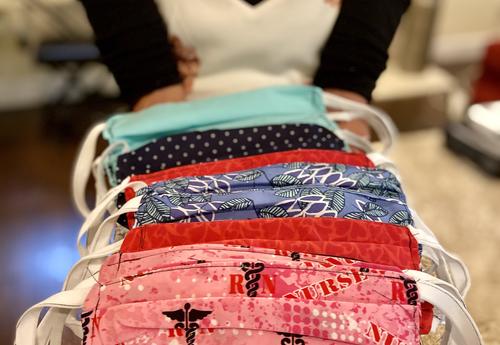 Notre Dame alumnae are scattered across the globe, working in myriad industries and volunteer capacities. In this COVID-19 crisis, many are serving on the front lines as first responders and as nurses, doctors and researchers. Current students, although sheltered in place, are also doing some amazing work to help their ND sisters and the greater community get through this crisis. We are highlighting just a few who have been in touch with us lately. If you are an alumna or the parent of an alumna, please contact us with updates. 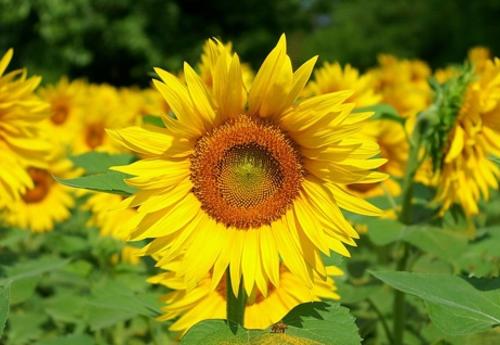 Caring for Our Community - Spiritual Wellness: A Call to Leadership

Julie Billiart knew well what it was like to live in uneasy times. Indeed, the tumult of the French Revolution and her own poor health could easily have been cause for anxiety. And yet, Julie gave care and attention to her own spiritual wellness in order to draw strength from the good God. And it was this very spiritual practice that empowered her to respond to the signs of the times with confidence, courage and leadership. Though we live in a very different time, the invitation to care for our own spiritual wellness is just as important for us as it was for Julie. 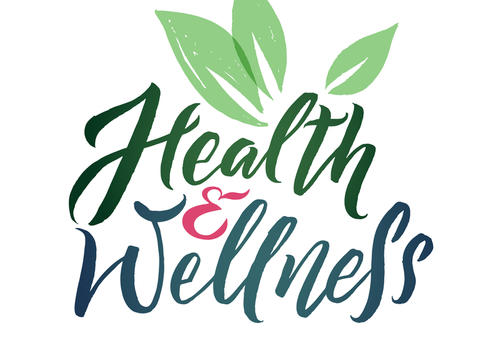 Caring for our Community - Health & Wellness

Caring for our mental and physical wellness is of utmost priority during times like these and serves to strengthen us, as individuals, as well as our community as a whole.  To complement the important learning happening for students in their virtual classrooms, we want to make sure we are also attending to the whole student. This includes providing opportunities for students to connect with each other in different ways. 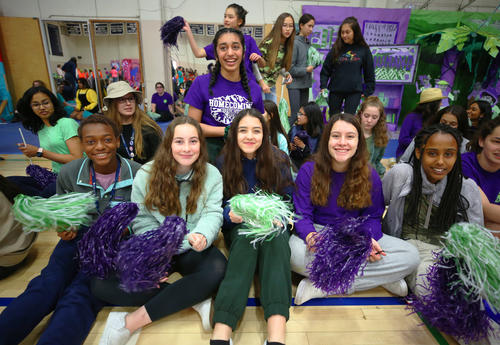 For more than 20 years Notre Dame students have celebrated Spirit Week with games, cheers, crazy costumes and lots of laughter and hugs. This year the Jaguars, Raptors, Tigers and Griffins continued the tradition and celebrated sisterhood and silliness! Special thank you to Sarah '20 for creating a video to help capture the joy that is Spirit Week! 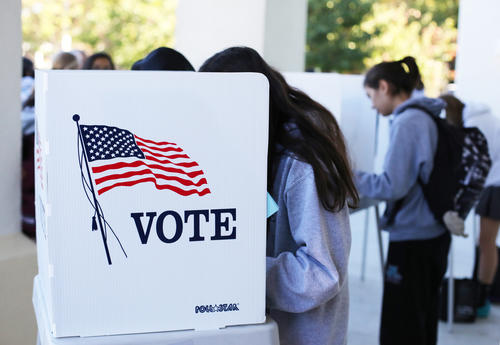 One of the values and traditions of Notre Dame is its engagement in the community. The school is committed to fostering active membership in society including participation in elections. In conjunction with Super Tuesday primaries, students organized a mock election. We also welcomed Mary Fierros, who is one of the oldest living "Rosie Riveters," to campus to encourage students to cast their vote. 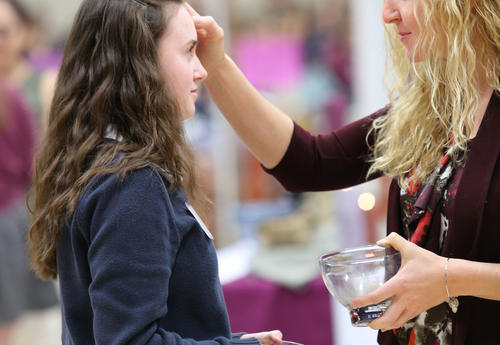 The ND community of faculty/staff and students entered the Lenten season with a prayer service. Presided over by Father Victor Trinidad and featuring a theme of "Belonging & Brokenness" the liturgy was organized by the Peer Ministry Leadership Team and featured student liturgical and music ministers. 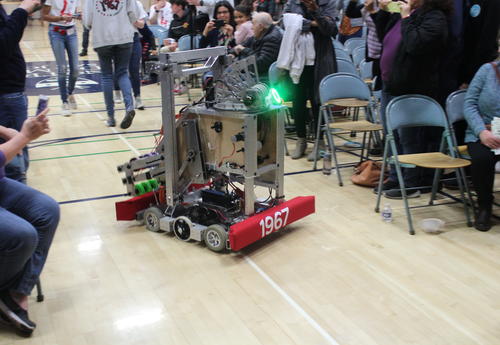 On Saturday, February 22nd, the Janksters hosted their annual Robot Reveal Night to showcase the robot the team had just six weeks to brainstorm, prototype, and build for this year’s challenge. FIRST (For Inspiration and Recognition of Science and Technology), an innovative program that encourages kids to pursue knowledge and skills in STEM, released a new challenge (Infinite Recharge) to their FRC (First Robotics Competition) teams on January 4, kicking off the 2020 Build Season. Robot Reveal Night allowed team members to present their achievements in front of parents, mentors, sponsors and guests. All eyes were on the robot as it made its way down the aisle in JB Hall. 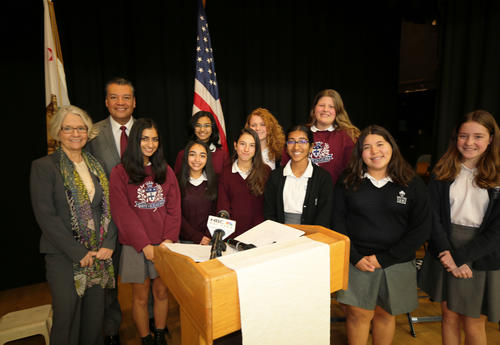 Today Secretary of State Alex Padilla visited Notre Dame High School and spoke to students about the importance of voting. Secretary of State Padilla has visited more than 80 high schools across "the four corners of the state" in recent weeks. Invited by Malyna Trujillo '23, a leader of Notre Dame's League of Young Women Voters club, his visit to Notre Dame was the first to an all-girls school. 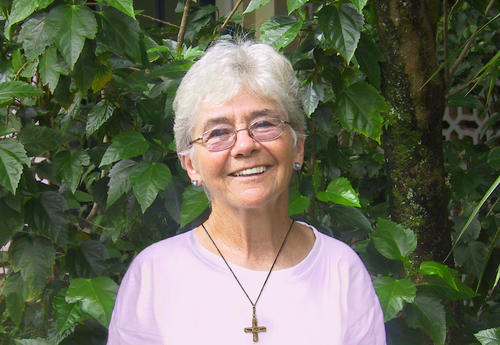 February 12 marked the 15th anniversary of the death of Sr. Dorothy Stang. She dedicated her life & work to poor migrant farmers & the Amazon rainforests of Brazil. The Sisters of Notre Dame de Namur have dedicated 2020 to honor her legacy. Let us pray, God of goodness, On the 15th anniversary of Sr. Dorothy Stang's martyrdom, we proudly join the global Notre Dame family to begin this year of remembrance and celebration. As we lift up Sr. Dot's legacy at various moments throughout the year, may we proclaim your goodness, embrace your people, and care for your creation. St. Julie, pray for us. Sister Dorothy, pray for us. Let us together say, Amen. 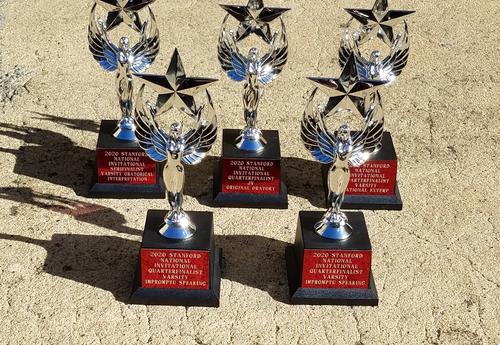 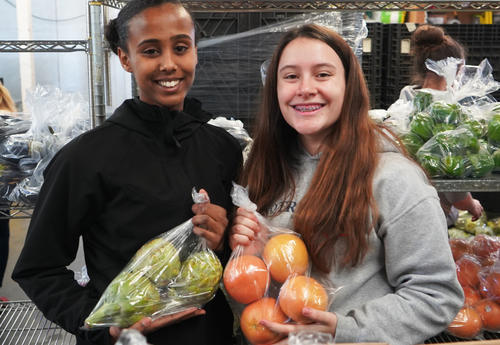 Sacred Heart Immersion Teaches Students About the Realities of Poverty

Justice immersion opportunities are powerful learning tools that surround a student with an intense experience. Through local, national and international immersion experiences, students are empowered to work effectively with diverse populations in a variety of settings to build global perspective, cultural competency and cultural fluency. This week 20 Notre Dame freshmen participated in a local plunge experience at Sacred Heart Community Service, located in the heart of our downtown San Jose neighborhood. 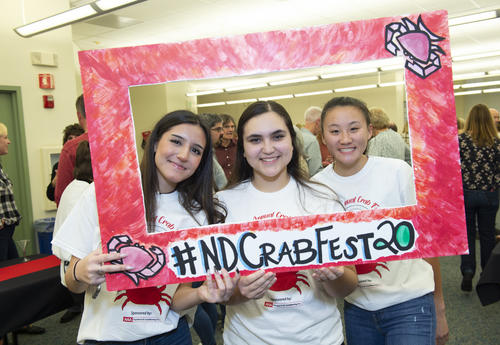 Notre Dame's 17th Annual Crab Fest sold out in just a few minutes again this year! The event, made possible by a dedicated committee and more than 200 parent and student volunteers, raised money for co-curricular programs including athletics, robotics, ASB leadership and the Peer Ministry Leadership Team. 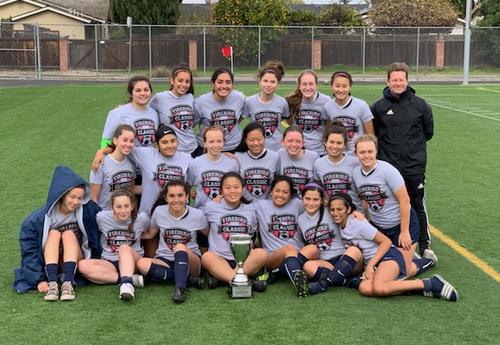 Notre Dame's Varsity Soccer Team was recognized by the Central Coast Section as a Winter Scholastic Championship Team. The 4th highest GPA in the division. Congratulations to our scholar athletes! 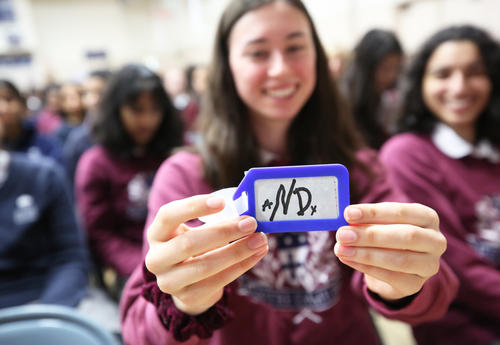 Students began the day with an enthusiastic assembly recommitting to their theme of Belonging. In the evening, the Learning Commons was filled to capacity with parents excited to get a grade-level preview into the next school year as well as a virtual floor-by-floor tour of what students will be experiencing next year in the Center for Women's Leadership. 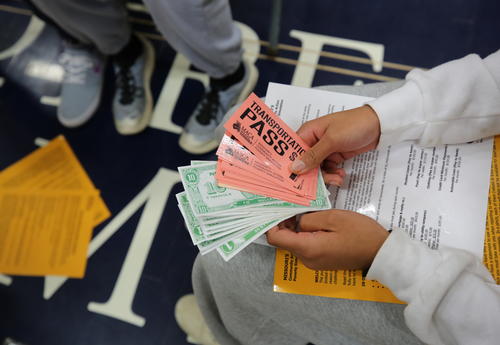 Class of 2022 Steps Away to Build Community, Compassion & Sisterhood

For the last two days all students in Notre Dame's Class of 2022 have participated in breakaway activities exploring themes of community, communion and relationship. One integral component of this breakaway experience is the Community Action Poverty Simulation, a program of Catholic Charities of Santa Clara County’s Step Up Silicon Valley. The Community Action Poverty Simulation (CAPS) immersed participants in the reality of a Silicon Valley that grows in disparity as much as prosperity. 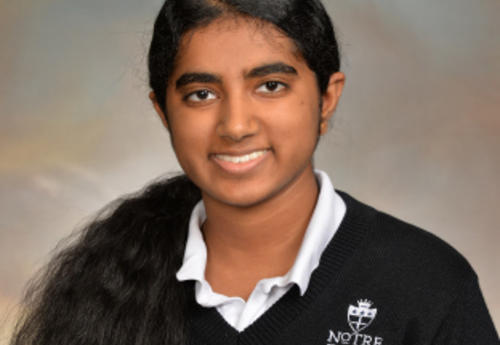 Notre Dame Senior Named Among Top Scientists in the Country

Shruti Sridhar '20 was recently named as one of the top 300 scholars in the Regeneron Science Talent Search 2020, the nation’s oldest and most prestigious science and math competition for high school seniors. The Regeneron Science Talent Search scholars were selected from 1,993 applications received from 659 high schools across 49 states, Washington, DC, Puerto Rico, Guam and eight countries. 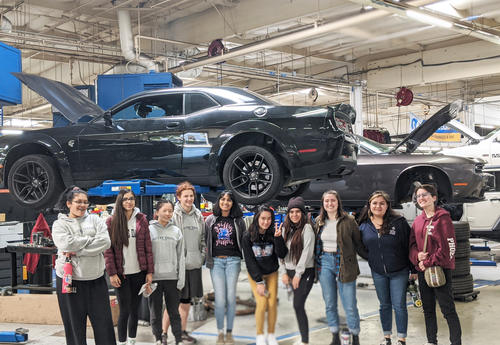 Teaching Them What they Need to Know for Life 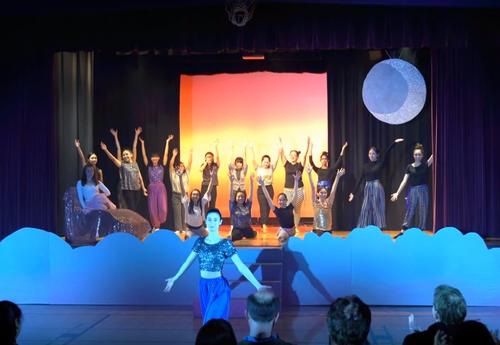 Notre Dame Presents Once Upon a Dream 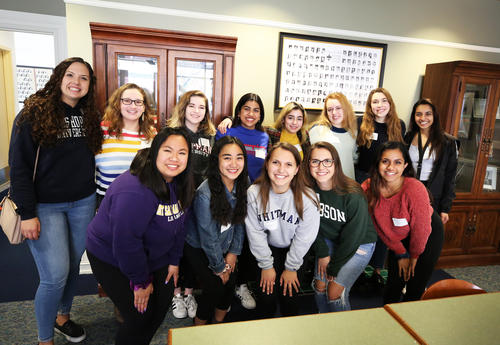 ND Welcomes Alumnae Back to Campus for College Panels

Our most recent alumnae returned to campus to share their experiences with current students this week, providing insight into college life. 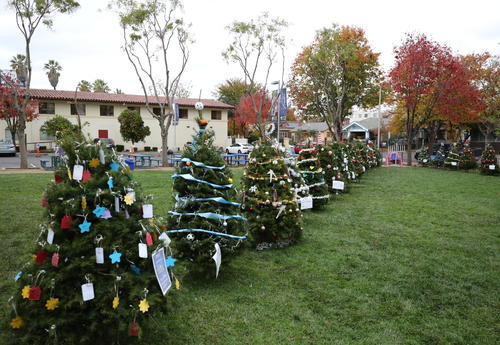 Notre Dame kicked off the Christmas season this week with a cookie contest, tree decorating and our 5th annual Christmas in Pardini tree lighting! Family and friends braved the drizzly weather to enjoy hot cocoa, treats and performances by Notre Dame's vocal and dance groups. 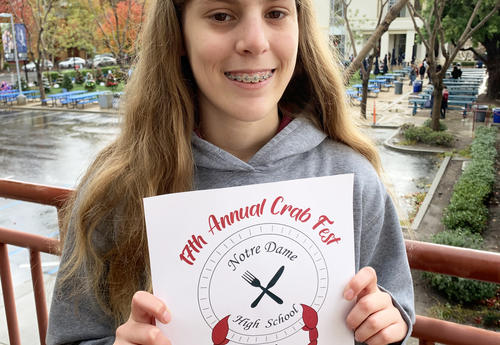 Congratulations to Melia '22 who created the winning artwork for our 17th annual Crab Fest! We look forward to welcoming a sell-out crowd to campus on February 1 as we raise funds for co-curricular programs. Thank you, in advance, to the hundreds of dedicated volunteers who make this event such a success every year. 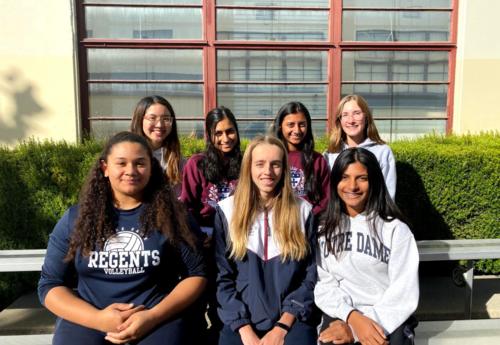 The more than 100 student athletes participating in volleyball, cross country, tennis and golf  wrapped up their 2019-20 fall season recently with an awards ceremony. Eleven students were recognized by the West Bay Athletic League for their outstanding performance. 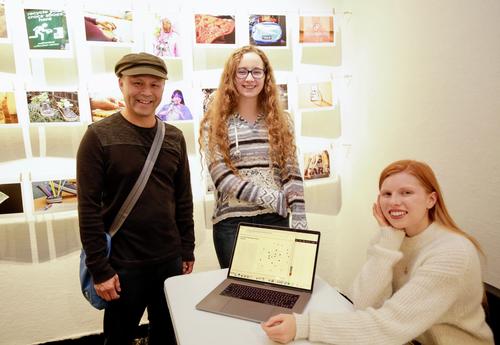 Fast Fashion opened on the San Jose State University campus this week and included the art of Notre Dame students Mikaela Brennan '20 and Marley Gerhart '21. Curated by artist and professor, Dr. Jonathan Fung, Fast Fashion invites viewers to contemplate their carbon footprint and the environmental impact of their clothing purchases.